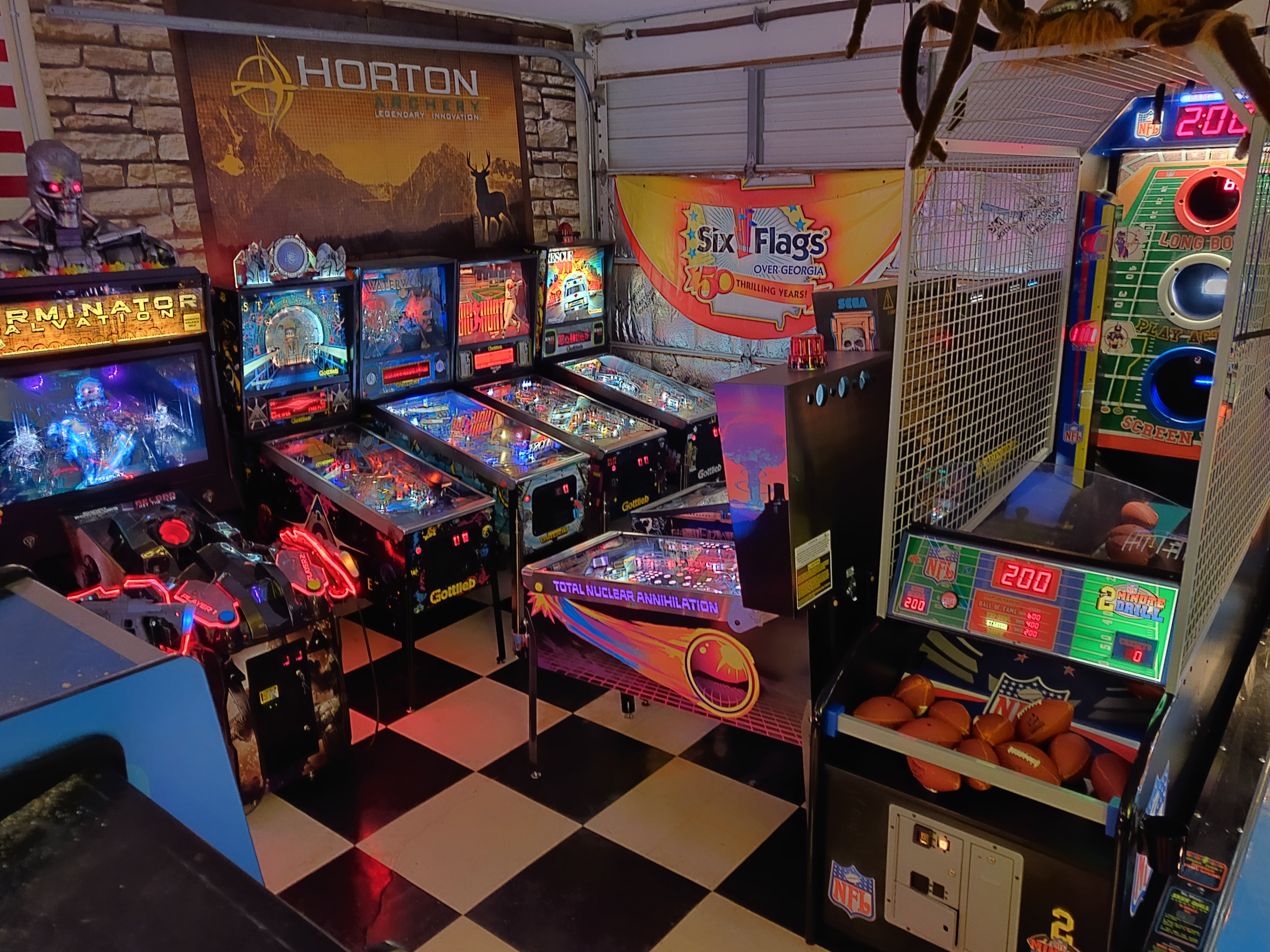 Guests (that are on the reservation) will have complete and sole access to the 160 sq/ft tiny house. It is tucked away in the back corner of our property, not connected to our home. You will also have 24/7 access to our private arcade. The games range from 1974 to 2020. There's something for everyone! nnPLEASE DRINK RESPONSIBLY IN THE ARCADE (don't spill anything!!!) DO NOT PUT YOUR DRINKS ON ANY GAMES. SET DRINKS IN THE DRINK HOLDERS ON (or near) THE GAME YOU ARE PLAYING. nnGames include a 4 person Pac-Man Smash air hockey, pinball games, arcade games, shooter games, driving games, electronic dart board, puck bowling, skeeball, NFL football toss and more. There are currently 40+/- games on hand (as of 2/17/18 - see list below) but we're always adding to the lineup. Everything except the claw games are set on free play. nnOur entire backyard is yours as well (EXCEPT THE BBQ GRILL). We have a sundeck w/ lounge chairs, 2 Pawleys Island XL rope Hammocks and a big screen room with eating area, TV lounge area and a vintage, coca cola fridge should you require more fridge space. nnThere is a 18 x 36 in-ground, saltwater swimming pool (3 to 8 ft deep. Saltwater means there are no harsh chemicals to irritate your eyes or skin. We installed a new liner and LED light in 3/18. The light makes night swimming a lot more fun! You can swim anytime but after 10pm please keep the noise down. You will have to sign a waiver if you plan on using the pool. nn>>>The slide, diving board and hanging chairs have a 200 lb weight limit.<<< nnPress the u0022homeu0022 button on the TV remote and you'll be able to choose from free Netflix, HULU, Amazon videos, Disney+ & many local Atlanta channels. nn2/5/18 - We just bought 9 of hip hop artist T-Pain's arcade games from his private gameroom in his Georgia mansion! He had some incredible games & we were very fortunate to be able to acquire them. nn>>NO DRINK SPILLS IN THE ARCADE PLEASE!!!<< Sorry, but I need to keep saying this because we've had some irresponsible guests spill drinks on/in some of the games and on the floor. It creates an incredible nightmare for me. nnCurrent Pinball Games:nnAC/DC (LUCI) (Stern, 2013)nCirqus Voltaire (Bally, 1997)nFrank Thomas' Big Hurt (Gottlieb, 1995)nGame of Thrones (Premium) (Stern, 2015)nGilligan's Island (Bally, 1991)nHarley-Davidson (Sega, 1999)nIron Man (Vault Edition) (Stern, 2014)nJurassic Park (LE) (Stern, 2019)nMary Shelley's Frankenstein (Sega, 1995)nThe Munsters (Pro) (Stern, 2019)nMustang (Pro) (Stern, 2014)nNBA (Stern, 2009)nNBA Fastbreak (Bally, 1997)nPunchy the Clown (Alvin G, 1993)nRescue 911 (Gottlieb, 1994)nRollerCoaster Tycoon (Stern, 2002)nThe Simpsons Pinball Party (Stern, 2003)nSky Jump (Gottlieb, 1974)nSpider-Man (Vault Edition) (Stern, 2016)nStargate (Gottlieb, 1995)nSuper Mario Bros. Mushroom World (Gottlieb, 1992)nTotal Nuclear Annihilation (Spooky, 2017)nTwilight Zone (Bally, 1993)nWaterworld (Gottlieb, 1995)nThe Wizard of Oz (75th Anniversary) (Jersey Jack, 2013)nWorld Poker Tour (Stern, 2006)nnCurrent Arcade Games:nnNFL 2 Minute Drill - I.C.E. 2017nBig Buck HD 57u0022 w/zombie pak!- Raw Thrills 2014nFast & Furious u0022Super Carsu0022 (Linked pair) - Raw Thrills 2011 nSuperBikes 2 - Raw Thrills 2010 nTerminator Salvation 42u0022 - Raw Thrills 2010 nNascar MOTION (57u0022 screens) - EA Sports 2010 (2 linked games)nH2Overdrive 42u0022 - Raw Thrills 2009 nParadise Lost deluxe (57u0022 screen) - Global VR 2006nCarnival King - Incredible Technologies 2002nMotocross u0022GOu0022 - 1997 - NamconGorf - Midway 1981nStar Castle - Cinematronics 1980nAsteroids - Atari 1979nMs. PacMan - 60 in 1 multicade (has many classic games you know & love)nVertigo - 862 in 1 multicade (has many classic games you know & love)n3 claw machines! n2 to 4 player Pac-Man Smash air hockey - Bandai Namco 2017nSKEE BALL Lightning - 1994nnIDENTITY:nThe guest responsible for the reservation must be present at the time of check-in unless previous arrangements are made. We also reserve the right to ask to view government issued ID for any members of the guest party before entering the property. 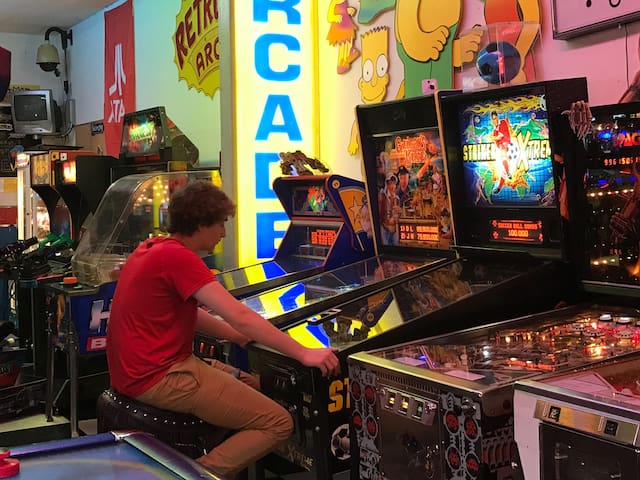 Board games and full arcade on freeplay!

28 pinball games and 25 arcade games all on freeplay (except the 3 claw machines). Arcade is open for your own private use 24 hours a day!

Check reviews from our guests

Can I invite my friends & family to play in the arcade and swim in the pool for a few hours?

No, you cannot bring any extra people. Due to insurance reasons, everyone on our property MUST be on the reservation/booking.

Can I bring my pet/s?

No, we do not allow pets because we have our own dogs on the property.

Is there a kitchen where I can cook?

No there is no kitchen in the tinyhouse. Guests usually get take-out foods like pizza or one of the many other uber eats delivery options.

Can I use your BBQ grill?

No, we do not allow our guests to use our BBQ.

Do the arcade games cost money to play?

The only games that are NOT on freeplay are the 3 claw machines because they cost money to fill with prizes.

How many people do you allow?

We allow 5 people total. Please understand that while it is possible to sleep 5 people in the tinyhouse, it will be tight! We do allow people to sleep in the screen room during the warmer months.

Can I bring my toddler or baby?

No. We do not allow kids under 6 years old on the property.

Can I have a party?

No, we do not allow "parties", "events", "get togethers", "Dinner parties", "family reunions". We encourage family birthdays and anniversaries but loud, drunken adult parties can't be done here. Our neighbors wouldn't appreciate that.